Huts on display or for study by appointment

Gressenhall Farm & Workhouse: Museum of Norfolk Life. Accession No. GRSMR : NN377. Hut used at Yaxham, about 5 miles from Gressenhall. The interior is fitted with a bunk bed beneath which is a caged apartment for keeping sick lambs. It has a built-in folding table with a cupboard above for medicines, together with a small cast iron stove. © Rural Museums Network

These huts allowed shepherds to live and work in the fields at lambing time. Utilitarian in design and often roughly finished, they are the antithesis of the domestic interior. There is renewed interest in them today. We like their association with age-old concerns such as the struggle against the elements, and bringing new life into the world. We are attracted by the detatchment and self-reliance they offer.

This list is compiled from information provided by Network members in February 2010. It is not restricted to huts in museums, and is by no means comprehensive. As huts are portable, and require maintenence, please check availability before making a visit.

Handbury Hall, Worcestershire (National Trust)
An example in the grounds of the Hall.

Rural Life Centre, Tilford
A hut by Taskers of Andover is on permanent display. The interior is fully furnished.

University of Oxford’s Harcourt Arboretum, Nuneham Courtney
This example has an interesting museological connection in that it once belonged to General Augustus Henry Lane Fox Pitt Rivers, the eminent archaeologist. ‘The General’s caravan’ as it became known was reputedly used by him as a shelter at his excavations. 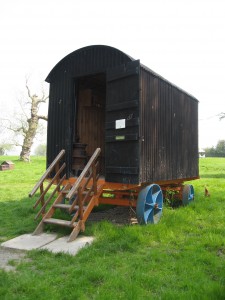 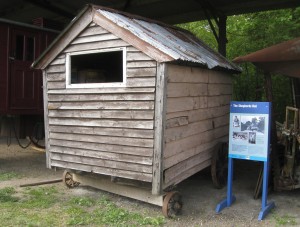 Shepherd’s hut at Museum of East Anglian Life, Stowmarket. A hut visible to the public from outside. The interior is currently under restoration. Image date May 2013 © RMN 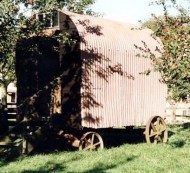 Somerset Rural Life Museum, Glastonbury. Accession No. TTNCM : 54/1987/1. A hut on display thought to have started life as a road worker’s living van, then used as a shepherd’s hut on the nearby Butleigh Estate. Image date 2009 © Somerset Heritage Service 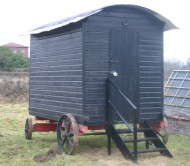 Huts in museums often have reconstructed interiors based on accounts of how they were fitted out. More often than not the stove is by the door to make it easier to refuel and empty the ash. 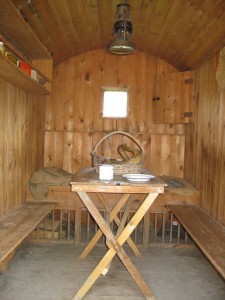 To find out more…

While Shepherd’s Watch… an article by Mike Wall, sometime curator at Weald and Downland & Amberley Museums, in Vintage Spirit magazine for February 2003, pages 28-32.