The Settling House from Bury St Edmunds is now on show at the Museum of East Anglian Life, Stowmarket in Suffolk.

Its unusual name stands out and so too does its distinctive octagonal shape. Now the former counting house, once the focal point of the cattle market in the heart of Bury St Edmunds in Suffolk, has found a new role as the latest building exhibit at the nearby Museum of East Anglian Life in Stowmarket.

Added as part of the museum’s successful HLF-funded makeover and once again painted a distinctive white, this 1864 timber building is sited at one of the key visitor access points to the museum’s 75 acre site, which now houses fifteen rescued and recreated historic buildings from all over the region.

Lisa Harris, the museum’s Collections Manager, has been delighted with visitors’ response to this new addition. “In rescuing the Settling House, which dates from 1864,” she said, “we aimed to preserve an important part of Suffolk’s past as a reminder of the time when agricultural trade was the lifeblood of places such as Bury and Stowmarket.” 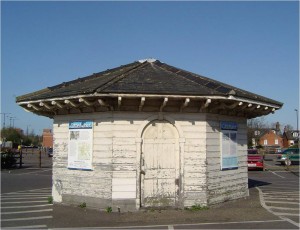 Lisa added that “this simple building reminds us that the market was not just a place for meeting people and doing business but the symbolic meeting point between town and county, which is one of the museum’s main themes. Our visitors appreciate that.”

With two access doors and six windows, the Settling House served its busy purpose for over 130 years until the market closed in December 1998. Traders met here, tickets to the auctions were handed out and accounts settled.

Lisa also has her eye on another aspect of the building’s function, as the toll collector was allowed to sell ginger beers and buns. “Reviving that would be a great attraction”, she feels, and a very appropriate use, well positioned on the visitor route around the museum’s many attractions.

Internally the simplicity of the building is apparent, and on display are charming line illustrations of the old cattle market in Bury by famous artist David Gentleman, whose name is firmly associated with East Anglia’s rural heritage.

Gifted by its owners St Edmundsbury Borough Council after some years in store, the building was recreated on its new site by Vinci Construction, of necessity working from sight rather than any original plans. The result captures an essential simplicity in timber with a projecting slate roof, sprocketed eaves providing an attractive adornment.

Restoration was funded with grants from the Heritage Lottery Fund and a range of trusts and foundations to a total project cost of c. £50,000. Bury cattle market is now the site of the arc shopping centre.

Click here for more on the Museum of East Anglian Life