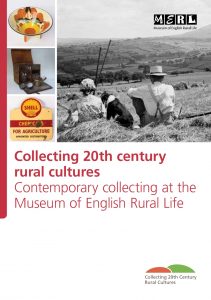 In 2008 the Museum of English Rural Life, at the University of Reading, was awarded a grant by the Heritage Lottery Fund as part of its Collecting Cultures initiative.

The resulting project, Collecting 20th Century Rural Cultures, aimed to acquire material that built a picture of the English countryside in the twentieth century, decade by decade.

The museum looked for signal items that speak powerfully of their day and illustrate the wider cultural influence of the countryside on English society, ranging from Glastonbury Festival programmes and Corgi toys to Arts and Crafts furniture and industrial chemical advertising signs. This process also encouraged the team to consider the concept of ‘rural Englishness’ and how it changed throughout the course of the century.